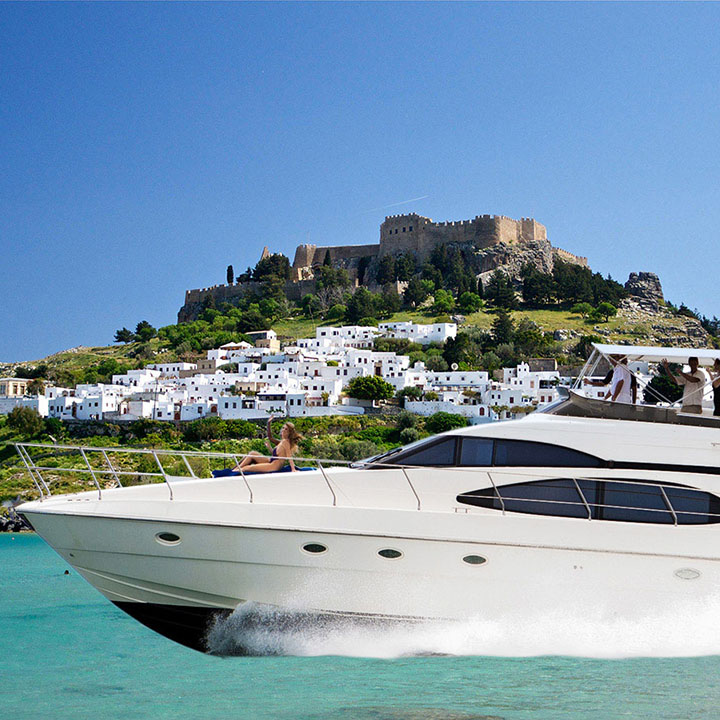 Set sail on the clear blue waters of Aegean on a motor yacht cruise of Rhodes. Cruise along the scenic eastern and southern shores, stopping to swim on some of the island’s most beautiful beaches, including Lindos, St. Paul Bay, and Anthony Quinn. Enjoy free time to explore traditional Lindos village and, if you like, head to the top of the Acropolis of Lindos for ancient history and spectacular coastal views.

Stop for swimming in the crystal clear water of St. Paul`s Bay and then, have lunch on the deck of the motor yacht. You can choose one of the 2 menu choices ( appetizer, salad, bread, main course, desserts) and having free drinks as wine beer, cola, water.

One of Rhodes’ three most prominent ancient cities, the site of Ancient Lindos lies 45km south of modern day Rhodes city, making a popular attraction for those intrigued by the history of ancient Greece. Founded by the Dorians in 10th century BC, Lindos was once a major trading center connecting Greece to the Middle East, before falling into decline after the city of Rhodes was established in the fifth century.

Today, the modern town of Lindos has grown up in the shadow of the acropolis and a 14th century medieval castle surrounds the ruins of the ancient citadel, keeping watch over the town from its dramatic clifftop perch. Standing proud atop the 116-meter tall rock, the remains of the acropolis include the Doric Temple of Athena Lindia, dating back to around 300BC; parts of the 20-columned Hellenistic stoa; and a 5th-century BC propylaeum (temple entrance).

Outside of the castle walls, the dilapidated remains of an ancient theater hint at a former 1,800 capacity auditorium, although all that is left is a mere section of seating. 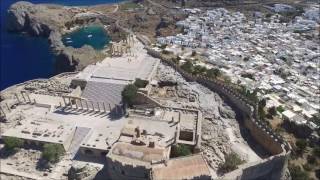 The Acropolis of Lindos and Saint Paul's Bay in Lindos, Rhodes

The Acropolis of Lindos and Saint Paul's Bay in Lindos, Rhodes - youtube Video

Except the nice design, the spaces of the boat, are comfortable and no crowded of people like other boats. Captain and crew, are more than polite, doing the best for the passengers to enjoy by the best way the sea excursion. Travels at 22knots and arrived in Lindos an hour before the other boats.
Walk up to the Acropolis was steep and rocky. We could have ridden donkeys to the top but decided to walk. Once to the top of the trail, there were quite a few stairs to climb but all of this is quite manageable. The view at the top makes it all worth it. Village at the base of the hill was very interesting and enjoyable. Lots of little shops and cafes.
Stopped off for lunch and swim at St. Paul’s bay and then a swim at Anthony Quinn bay
The meal was perfect with huge portions, soft drinks, beers, water, all included in the price. The durations of the stops are enough to enjoy the place and sea, and the departure like the arrival, was on time.
Can’t recommend enough, it was definitely worth doing it this way rather than just a ferry trip or a bus. It was super relaxed and a lovely day out. Recommend to all!

by Alison on LINDOS - LUXURY CRUISE

Great day out on a lovely motor yacht , max 20 people , all the 3 staff were friendly and pleasant, would certainly recommend to anyone. The staff made you feel individual, with the yacht being medium size it felt more personal unlike some of the bigger boats .

We arrived in lindos ,to have 3 hours to explore this beautiful place with its cobbled streets ,and donkeys to take you up and down to the acropolis but the exercise walking up and the beautiful views of the bay was worth all the effort. We made getting up to the top , beware the cobbles can be very slippy so please were good shoes.The little tavern and gift shops are stunning .

Back to the boat we was taken to a little bay (St. Paul’s bay) for a swim and a lovely lunch of moussaka, which was lovely you could have beers, wines, soft drinks after lunch, then we went to another beautiful bay for more swimming (Anthony Quinn's bay ) where we had 30 min or so to enjoy the views, swim and snorkelling.

Back on board to dry off , more drinks then a lovely relaxing cruise back to Faliraki, well worth every penny for a lovely day out with the personal touch ..!!!

This was our favourite visit in our week long holiday to Rhodes. Highly recommend the cruise .

LINDOS – LUXURY CRUISE
Maps were disabled by the visitor on this site. Click to open the map in a new window.
Scroll to top